Yesterday was my birthday (and my Ritika’s was 2 days before mine in the same year – we are just 2 days apart so we celebrate the New Year and our birthdays in quick succession). I lucked out because Ritika took me to this gourmet place for breakfast called “Jersey HOT Bagel”.

We normally go to another smaller joint called Jersey BOY Bagel, known for its collection of 40+ bagels and 30+ cheeses..

This time, we decided to try something new…

As it turns out, the large joint had the same selection and was the ‘parent company’, having split from the smaller one because of ‘commercial differences’, as the owner put it..

As far as I was concerned, we were there for the BEST low fat vegetable cream cheese and the multi-grain bagels ever – certainly the best in the east coast.

But this is where the similarities ended. The 10 minutes I spent at Jersey HOT Bagel made me their customer forever.

As soon as we walked into the new place, we noticed –

a) A smiling, talkative owner called ‘Yogi’ who chatted with EACH customer, asked them “where have you been?? / so good to see you / happy new year / look at that beautiful scarf / the bagels just popped out of the oven / can you smell the onions / try this cheese – it has walnuts in it..

b) The proprietor was VERY generous with the portions of cream cheese on the bagels.. One might argue that $2.75 for a bagel and cream cheese should get you a generous portion, but that was not the case with the older place

c) My wife did NOT like the jalapeno cream cheese, so I decided to get her something different, and walked over to the counter to buy some walnut cream cheese as a side order. The owner scooped up ANOTHER generous portion of the cream cheese and said “it’s on the house, come back again and bring your friends”

What do you think happened here?

A brilliant combination of

This guy knows a thing or two about business. My wife spend about $12 on breakfast, including eggs and coffee. When we do this twice a week (which we normally do), we will help him bring in $100 each month, $1200 each year from us. 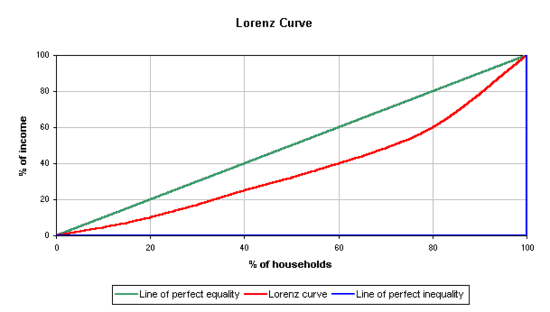 This is one of the ways the ‘Lorenz curve’ works – a representation of the manner in which wealth is distributed across masses. In a 10 year period, we are worth $12000 to him, and its business he generated out of thin air, while Jersey BOY Bagel lost us because of

This does not even take into account the potential of referrals. Let’s say we referred ONE person a year to him (we already referred a couple of our friends), our combined value to him now, is over $100,000 over a 10 year period. The relationship with us can pay to send his kids to college.