Ritika and I are flying back from Las Vegas, after attending a conference and interacting with business owners and entrepreneurs. The plane is zipping towards New Jersey at an altitude of 37,000 feet, and I can’t stop typing.

What I witnessed yesterday was like flying at the same altitude, but at ground level.

One of the events I attended was called “How to use your brain” by Eben Pagan and Wyatt Woodsmall Ph.D.

Eben, a self improvement guru I have been observing for a long time, interviewed Rhonda Rajsich, a racquetball player.

Having trained several raquetball players, I understand the sport and was looking forward to it.

But Rhonda was a bolt of lightning. She is the 2009 US Open champion. She is also the current World Champion, winning the title at the 2008 International Racquetball Federation (IRF) World Championships in Kingscourt, Ireland.

The odds she overcame to win the title sends chills down my spine as I type this and feel the flight turbulence. (Ritika and I spoke with Rhonda back stage and she is going to email me the official press release of her story, which I will post for you).  Update – here is the information directly from Rhonda about her incident.

This gut wrenching story, which Rhonda revealed at the seminar, goes like this:

In June 2008, 2 months before the World Championships in Ireland, Rhonda was the victim of a savage attack by 2 men with knuckle irons, who relentlessly punched her face in, COMPLETELY shattering the right side of her skull. She said (verbatim) “I felt my face shift”. (to this day, she feels the pain in her titanium reconstructed face).

The only reason she did not fight back during the attack was because “I did not want to put my fist through his stupid face and endanger my chances of competing in the world championships” in August, 2 months away.

Following facial reconstructive surgery, Rhonda was unable to use her facial muscles, let alone chew. While recovering in bed, her body weight dropped from 145 lbs of predominantly muscle to a week 115 lbs within 30 days, a result of an inevitable liquid diet of mashed potatoes and protein drinks.

She could barely move and the doctors, along with the WPRO would NOT let her go to Ireland.

This is where it gets really interesting.

Athletes are masters of visualization, and Rhonda has mastered the art.

Among the several things Rhonda did in the hospital, one stands out.

She ‘practiced’ her workouts mentally, felt her muscles contracting (through the pain) and rehearsed her strokes thousands of times a day while she was in bed, in between bouts of sedation-enhanced sleep.

What did Rhonda have to say about the intensity of her ‘mental workouts’?

Why did she do this? She knew in the very core of her being she was going to compete, and win the world championships. 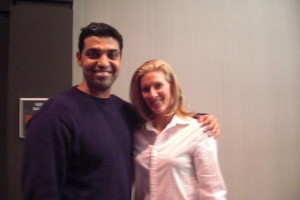 Within weeks of the surgery, Rhonda decided she was ready to get back on the court, and told the authorities she was ready for Ireland.

The committee said she was not ready and would not allow her to play.

She persisted, but no one listened.

Rhonda made a decision.

“I will make my intentions clear and let the universe take care of the rest”.

She wrote a letter to the authorities saying “You control whether I go to Ireland or not, I don’t. But what I can control is that I will win the World Championships for Team USA”

Amidst a standing ovation that shocked every country in attendance, Rhonda won the world championships, and is the current world champion.

And you want to know the best part?

She is not bitter at all.

She continues to improve her game today and is an inspiration for all young athletes.

As a community of physical therapists, we see challenge everyday in a patient’s life, and help them deal with it. We have a Rhonda in all of us.

We live a life of challenge and inspired action, like Rhonda.

Tell your patients the Rhonda story if they lose hope and express anguish about their condition. Tell them about the power of positive thinking and that you will help them every step of the way.

I know I will. 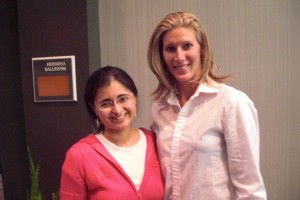 You can contact her through her blog.  I will put up the press release as soon as Rhonda sends it to me.

PS – Speaking of pioneering women, I have an exclusive interview for our blog with Laura Miranda, a physical therapist and group fitness specialist in New York City, who has single handedly pioneered the emergence of ‘bootcamps’ sweeping Manhattan.

Join us to the upcoming Referral Ignition 2016 to learn more about growing you practice. Expand your network and meet many more “Rhonda”s in terms of starting up a physical therapy business.