How To Use Twitter in your Physical Therapy Marketing 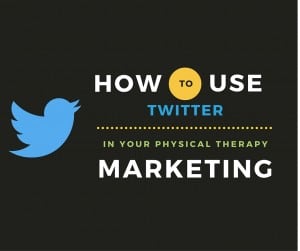 How feasible is the use of Twitter as a tool in Marketing Physical Therapy?  Let’s take a closer look.

This revolutionary social media platform has a network that doubles every 90 days. It is known by many as a great way to keep connected with friends & acquaintances. Though, it may also serve, as many have discovered, as a gateway to tap their target market.

Politicians, Celebrities & Large companies have taken advantage of this network & have flourished due to its aid. A perfect example of one who has effectively used twitter would be none other than, President Obama himself. He was able to constantly connect with his followers during his campaign, and it definitely paid off.

Due to the popularity of Twitter, its followers at times are at the helm in hearing about breaking news such as the results of a much awaited sports event, world news and many more, before any other news station.

More and more people are now turning to Twitter as an effective way to reach out to businesses. And a lot of establishments have been benefiting. They range from local stores, brick-and-mortar companies and even the big brands from the private sector. People are finding great value in the connections they make with businesses on Twitter. Which makes it one of the fastest, easiest & most cost-effective way to communicate with net-savvy patients, local businesses and companies in your area.

Marketing Physical Therapy Businesses has never been easier. Staying connected with current patients & gaining potential clients can all be done by a few clicks. As a private practice owner, keeping abreast of the goings on with other physical therapy businesses is a must to stay on top of the game.

Social media is a great marketing tool for any fitness or physical therapy business. So, utilize it and see your practice grow.